Are there genes associated with longevity and health? And what to do when you don’t have them! 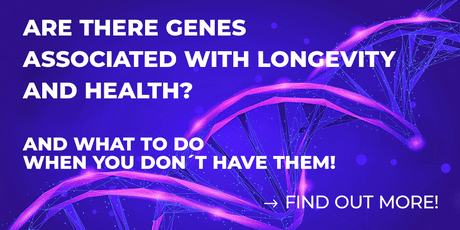 This result is quite striking as it is immensely difficult to find common genetic variants in a population as heterogeneous as humans.

APOE is the gene responsible for coding Apolipoprotein E, a key player in our lipid metabolism. APOE comes in 3 significant variants: E2, E3 & E4. While the E2 variant of the gene was enriched in the centenarian population, E4 is associated with a shortened life expectancy. The E4 variant is also well known for its association with a significantly higher risk of Alzheimer’s disease. There are several implications for ApoE4 carriers, particularly concerning saturated fat and heavy metal detox.

Around 20 – 25 % of the population in Europe/USA carries one or two copies of the E4 variant, meaning that a large number of people are actually carrying the “anti-longevity” gene, which is associated with a higher risk for several morbidities. While this sounds like overwhelming news, the saying “Genes load the gun, the environment pulls the trigger”, also holds true for ApoE4.

In our newest publication, our team screened more than 800 scientific papers to create a practical guide focusing not only on the risks associated with the E4 variant but also proposing a risk management strategy for APOE4 carriers based on the latest scientific publications.